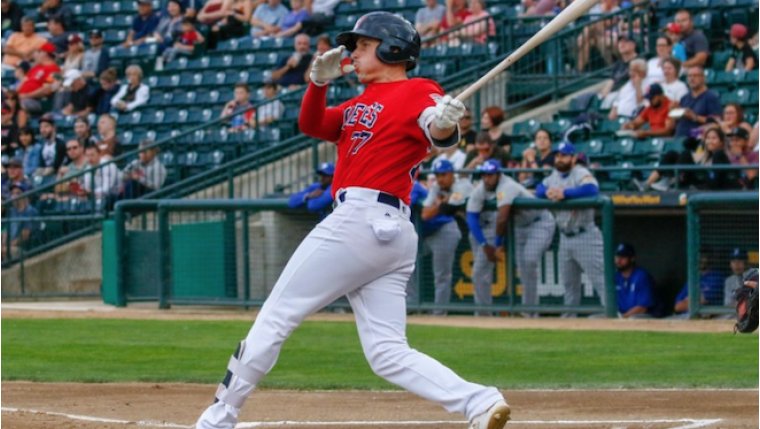 WINNIPEG -The St. Paul Saints beat Winnipeg 8-5 at Shaw Park Monday night to sweep the quick two-game series with the Goldeyes in the final regular season meeting between the two clubs.

With the win the Saints take a commanding six-game lead over the Goldeyes in the North Division standings as the two clubs battle for the last playoff spot with just 13 regular season games left.

Despite coming back from a 5-0 deficit early to get within a run in the bottom of the third, the Goldeyes were unable to get over the hump and fell short in front of the Shaw Park faithful.

The Saints broke the game open in the top of the second, scoring four runs in the inning to take a 5-0 lead. Blake Schmit smacked a two-run double, his 27th and 28th RBI’s of the season, to put the Saints up 3-0. Dan Motl drove an RBI triple to right field, scoring Schmit from second before being brought home on a sacrifice fly from Michael Lang, making it 5-0 Saints after two.

The Goldeyes were finally able to solve Saints’ starter Landon Beck in the bottom of the fourth, and began to chip away at the 5-0 deficit. After Tyler Marincov was walked, Wes Darvill doubled to centerfield where Dan Motl fumbled with the ball, allowing Darvill to advance to second and Marincov to third with nobody out. Next up was Reggie Abercrombie who ripped the first pitch through the middle to score both runners, getting the Goldeyes on the board, trailing 5-2.

With momentum on their side, Kyle Martin stepped in and crushed a two-run shot over the right field fence for his 12th home run of the season, and the Goldeyes were suddenly within one run of tying the game.

After a scoreless fourth and fifth inning, Saints Josh Allen connected on an solo shot to opposite field, his 17th home run of the year, making it 6-4 Saints in the top of the sixth. The home run was Allen’s second home run of the series and the sixth time he’s gone long in 12 games against the Goldeyes this season.

Once again, the Goldeyes were able to get within one in the bottom of the sixth inning when John Price Jr. reached with a double and advanced to third on a wild pitch before Rey Pastrana brought him home with a sacrifice fly to make the score 6-5.

The Saints would extend the lead in the top of the seventh when Adrian Marin fumbled an infield ground ball with the bases loaded that scored Dan Motl from third to go up 7-5. Cameron McVey then walked home Chesney Baker putting the Saints up 8-5.

Kevin McGovern (11-7) takes the loss for Winnipeg, giving up seven runs, six earned, on six hits while striking out three in 6.0 innings pitched.

Cameron McVey struck out two, allowing one run in 1.0 innings, while Justin Kamplain and Victor Capellan combined for two scoreless innings in relief.

After 22 consecutive calendar days with a game, the Goldeyes will finally get a day off on Tuesday and hit the road for the final time during the regular season as they begin a six-game road trip in Chicago with a three-game set with the Dogs beginning Wednesday evening, before wrapping up their road schedule in Fargo for a three-game series against the RedHawks Aug. 24-26.

Winnipeg returns home to round out their regular season schedule with a seven-game homestand beginning with a three-game series against the Gary-Southshore Railcats August 27.

Advance tickets are on sale now by visiting www.goldeyes.com/tickets or by visiting the box office at Shaw Park.