Goldeyes Bounce Back to Win 6-4 Over Saltdogs 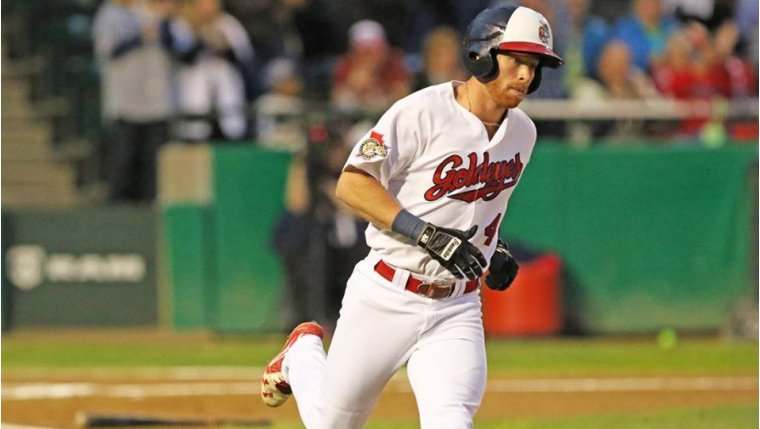 With the Saltdogs ahead 3-1 in the bottom of the fourth, Reggie Abercrombie singled leading off and advanced to second on a wild pitch. Kevin Garcia then singled through the right side to score Abercrombie and cut the lead to 3-2. Three batters later, and with Garcia now on second following a stolen base, Jordan Ebert ripped a double down the left field line to plate Garcia with the tying run.

In the top of the fifth, Ebert robbed Chase Simpson of a two-out base hit with a diving catch to his left that stranded the go-ahead run on second base.

With a runner on second and no outs in the sixth, Josh Blanco kept the game tied. Blanco ended the inning with a nine-pitch strikeout of Dashenko Ricardo that left runners on first and second.

Abercrombie singled to centre leading off the bottom of the sixth, took second on a wild pitch, and was sacrificed by third by Garcia. Josh Mazzola hit a sacrifice fly to left with Abercrombie scoring just ahead of a strong throw by Brandon Jacobs.

"I was ready," said Garcia on the sacrifice. "Before he gave me the sign, I was actually thinking about doing it myself. Reggie is a good runner, and Mazzola was behind me who is a really good hitter. If we could find a way to get Reggie in scoring position, even better."

Jack Charleston took over for Blanco and worked a perfect top of the seventh. The Goldeyes stretched the lead to 6-3 in the bottom half when Grant Heyman crushed a two-out, two-run home run to right.

"I think it was a big game for us," said Heyman. "We got beat pretty badly yesterday, so to bounce back from that and get a win I think is a big deal, and I think it speaks to how our team is going to be this year.

"Charle did a really good job throwing strikes and kept the tempo of the game pretty fast," Heyman continued. We were able to get in the dugout and hit, and our bats just started to click a little bit. We had more timely hitting and hits when they counted."

Cameron McVey pitched a perfect top of the eighth, while Victor Capellan worked around a two-out, solo homer by Ricardo in the ninth to close out the game. Capellan earned his fifth save of the year.

Blanco (0-1) was credited with the win in relief.

The Goldeyes took a 1-0 lead in the first when Heyman doubled to left-centre and scored on a line drive single to centre by Reynaldo Rodriguez.

The Saltdogs took the lead in the top of the second. With the bases loaded and two outs, Ricardo singled up the middle to score Simpson and Curt Smith. Chad Hinshaw scored from first on the same play after an error was charged to Abercrombie in centre.

Austin Robichaux (0-2) started for the Saltdogs and took the loss, allowing four earned runs on eight hits in five-plus innings. Robichaux walked one and struck out three.

Heyman, Abercrombie, Garcia, and Ebert each had two hits. Mazzola played in his 332nd consecutive American Association game, which is now two shy of the league’s all-time record.

The series continues Wednesday night at 7:05 p.m. Kevin McGovern (1-1, 3.86) faces right-hander Michael Tamburino (1-0, 2.38). Tickets for all Goldeyes' home games are on sale now by calling 1-855-GOLDEYE, visiting www.ticketmaster.ca/Goldeyes, or visiting any Ticketmaster location, including the box office at Shaw Park.