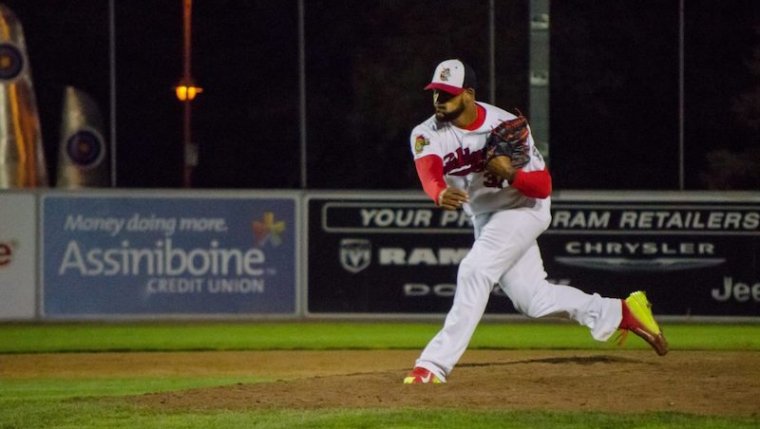 WINNIPEG - The Winnipeg Goldeyes (28-20) won the rubbermatch of their five-game set against St. Paul Monday night with a 7-6 win over the Saints on a history-making night at Shaw Park.

Winnipeg took a 6-1 lead into the fifth inning, but the Saints battled back and the Goldeyes had to hold on for the win. It was a fitting end to the game with Goldeyes reliever Victor Capellan coming in to shut things down in the bottom of the ninth, and in doing so the 29-year-old became the American Association All-Time leader in career appearances, passing Dustin Cameron with his 221st.

The Saints (31-18) struck first on Monday night, when red-hot Max Murphy notched his 41st RBI of the season that scored Devon Rodriguez in the top of the third to give the visitors a 1-0 lead.

The lead didn’t last long however, as the Goldeyes were able to get to Saints starting pitcher Dustin Crenshaw for the first time in the ball game. After Jordan Hovey was hit by a pitch and Kevin Garcia hit a single, Tyler Hill’s hot bat continued as he smacked an RBI double which brought home Hovey, tying the game at one. With the hit, Hill has now hit safely in nine consecutive games.

Alex Perez was up next and on the first pitch the second basemen knocked an RBI single that scored Garcia for his 14th RBI of the season, and the Goldeyes took the lead for the first time at 2-1.

Winnipeg would add to the lead before the inning would run out with Wes Darvill picking up his second hit of the game and 20th RBI of the season, ripping a two-out RBI single to put the Goldeyes up 3-1.

Just as they did in the third inning, the Goldeyes began the fourth by putting two runners on base with nobody out. With runners on the corner, Jordan Hovey connected on the first pitch he saw, bringing home Kyle Martin from third and upping the Goldeyes lead to 4-1.

Tyler Hill loaded the bases for Alex Perez, who was walked on a wild pitch that scored Young from third, and Winnipeg went up 5-1. Winnipeg would add one more run in the inning on an RBI fielder’s choice to James Harris to take a 6-1 lead.

The Saints were able to get back on the board with a run in the top of the fifth, cutting the lead to 6-2 before Josh Allen connected on his second home run of the series in the top of the sixth to get the Saints a little closer, trailing 6-3.

In the bottom of the seventh, James Harris broke the streak of nine straight batters retired by Crenshaw with a double to right. Darvill was then intentionally walked which was Crenshaw’s third walk of the game. It’s just the fourth time in 58 career starts in the American Association that Crenshaw has walked more than two hitters in a start. Ken Frosch relieved Crenshaw with two outs, and the first batter he faced was Kyle Martin who hit a single to right field that scored Darvill to up the Goldeyes lead to 7-3.

That run proved to be important because In the top of the eighth, Josh Allen smashed his second home run of the night, a three-run, two-out shot to left center off of Spencer Hermann to get the Saints within one, trailing 7-6.

The Saints would get some life in the bottom of the ninth when Devon Rodriguez picked up his third hit of the game with a double to get into scoring position with one out. Capellan forced Matt Morales into a pop up for the second out, and was able to lock down his 18th save of the year by striking out one of the hottest players in the league in Max Murphy in an 11-pitch battle. For Goldeyes Manager Rick Forney, seeing Capellan set the record didn’t surprise him at all.

“He’s (Capellan) been a warrior for us. Ever since we acquired him via trade, that guy is a big reason we won back-to-back championships, there’s no secret about that.”

Kevin McGovern (7-3), was solid once again for Winnipeg, giving up no walks for the second consecutive game and finishing with six strikeouts, but after the game, McGovern was quick to give praise to his reliever.

“If I have to look back at my entire career, he’s probably my favorite teammate in terms of how much I admire him,” says McGovern about Capellan. “He’s the hardest worker I’ve ever seen, he always has a positive attitude, he outruns everybody here, and he’s ready to go on any day that he’s called upon. I’m just so happy to be here to see this milestone.”

The game wrapped up an eight-game homestand for Winnipeg who will now hit the road for a six-game trip beginning Tuesday night in Lincoln, Nebraska. All the action can be heard locally on 93.7 FM CJNU and worldwide at www.cjnu.ca.

Winnipeg returns home July 16th when they open up a three-game set against the Sioux Falls Canaries. Advance tickets are on sale now by visiting www.goldeyes.com/tickets or by visiting the box office at Shaw Park.