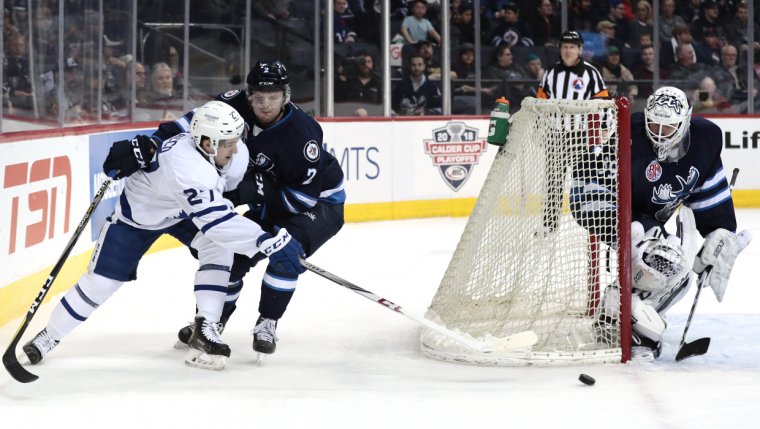 On Saturday afternoon in front of 6,844 at Bell MTS Place, Jeremy Bracco had the winning goal and an assist as he led the Toronto Marlies to a 5-4 victory over the Moose.

It was Manitoba’s fifth straight loss – all five have come at home in the past nine days – as they fell to 39-24-4-4 on the season. They are still one point ahead of the second-place Chicago Wolves in the American Association’s Central Division, but the Wolves lead by 19 percentage points and have three games in hand.

Miro Aaltonen and Trevor Moose gave Toronto a quick 2-0 lead in the first period, but Darren Kramer with his third of the season and Mason Appleton with his 21st on the power play got Winnipeg even before the first intermission. Buddy Robinson (26) and Sami Niku (36) picked up the assists.

Recently signed college star C.J. Suess scored his first for the Moose at 4:03 of the second to give Manitoba a 3-2 lead but Calle Rosen tallied his third of the year to even the score just before the end of the second.

However, Bracco scored his fifth of the year at 7:55 of the third and the Marlies checked out the clock to improve to 50-18-11- on the season. By far the best record in the AHL.

Once again, special teams had a lot to do with the outcome. The Moose went one-for-four on the power play while the Marlies were two-for-five for the second straight game. Once again, the Moose spent a lot of time shorthanded.

Toronto outshot Manitoba 36-32. Garret Sparks made 28 saves in the Marlies net to get the win. Michael Hutchinson made 31 saves in the Moose and took the loss.

The Moose have two more at home on this eight-game homestand (1-5-0) and then will finish the AHL schedule on the road at Cleveland and Chicago. The Moose play again this coming Friday night at 7 p.m. at Bell MTS Place, against the Bakersfield Condors.