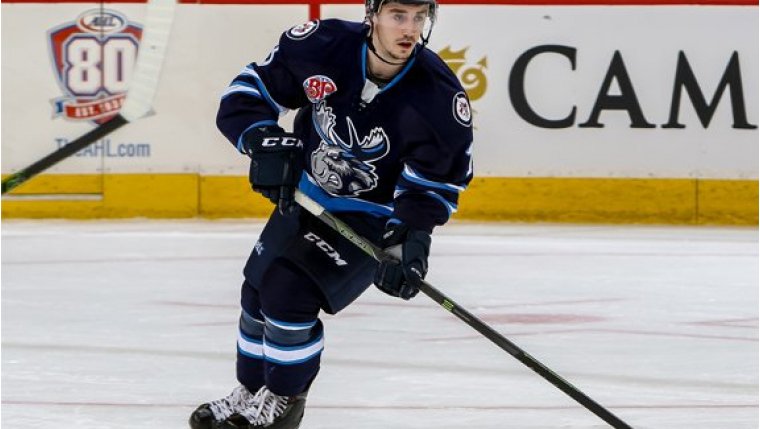 WINNIPEG, MB - Nic Petan scored his 14th goal of the season in overtime to lead the Manitoba Moose to another road win.

Petan scored at the 54-second mark of extra time to give the Moose a thrilling 3-2 win over the San Antonio Rampage in front of 6,909 at the AT&T Center in San Antonio.

With the win, the Moose improved to 38-17-4-4 and remained in first place in the American Hockey League’s Central Division, nine points up on the second-place Chicago Wolves.

After Mason Goertzen gave San Antonio an early 1-0 lead, Moose captain Patrice Cormier scored his 21st of the year on the power play from Petan and Michael Spacek. It was Cormier’s 190th career point with the franchise, making him the highest scoring centre in Moose/IceCaps history, surpassing Bill Bowler (1997-2000).

There was no scoring in the second period and then Andrew Agozzino scored at 7:09 of the third to give the Rampage a 2-1 advantage. However, the Moose tied it at 18:53 when Mason Appleton scored his 19th of the year with the extra attacker, from Cormer and Petan.

Then, before the opening minute of overtime as Petan took a pass from Sami Niku in his own end, took it straight down the ice, beat all Rampage defenders and buried the winner to give the Moose another road win. The Moose are now 23-6-2-2 away from Bell MTS Place.

Jamie Phillips had a terrific game in net for the Moose. He made 32 saves as San Antonio outshot Manitoba 34-21. Once again, the power plays were lopsided in favor of the home team. For the fifth straight game, the Moose spent an inordinate more time in the box than the home team. Manitoba went one-for-one on the power play while San Antonio was zero-for-four. It just looks kind of fishy.

The Moose play again on Saturday at 7 p.m. when they return to Cedar Park, Tex., to face the Texas Stars for the second time this week.

THE NOTEBOOK: Nic Petan was the game’s first star. He had the winning goal and two assists and is one of 17 players in the AHL with two or more overtime winners… Moose defenseman Nelson Nogier returned to the lineup after missing the first 62 games of the season due to injury… Sami Niku and Buddy Robinson assisted on the game winner. It was the only shot on goal for either team in overtime.