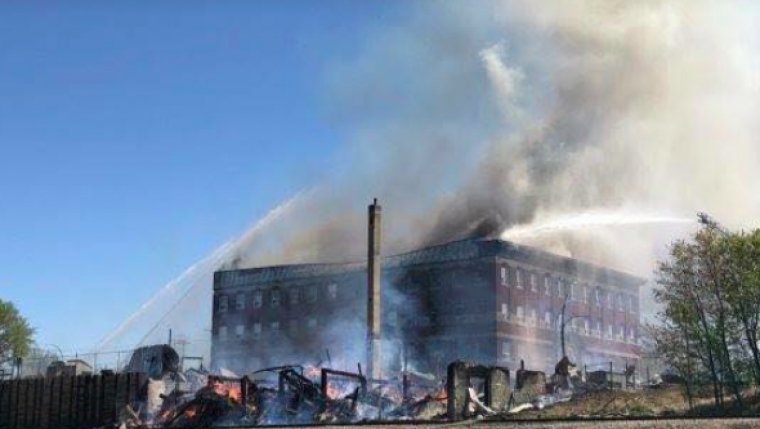 BRANDON — As a massive fire in downtown Brandon on Saturday began threatening other buildings, the chief of the Souris−Glenwood volunteer fire department was loading fertilizer into a truck at a farm 45 kilometres away.

Brian Parham received a text from his son, who is also a volunteer firefighter, letting him know the Christie’s Office Plus building was on fire, and when Parham looked up he could see the smoke filling the prairie sky.

Parham called the regional command centre to see if the city fire department in Brandon needed help, but he said they turned down his offer to drive in with their pumper truck.

But within five minutes they’d changed their minds, and Parham and a crew of rural firefighters were heading to Brandon to fight one of the biggest fires they’d ever seen.

"It was kind of an adrenaline rush for us to go in," Parham said Sunday, back at work on the farm.

"We’ve chased our share of grass fires.... We’ll have a house fire, but it won’t jump house−to−house, or in this case building−to−building."

There have been no reports of injuries in the Brandon blaze, which destroyed three buildings and significantly damaged Massey Manor, a 58−unit heritage apartment building where many of the suites are managed by community groups.

During much of Saturday afternoon, city officials were warning people to stay out of the area as drifting embers sparked new fires. Firefighters from the nearby communities of Wawanesa and Carberry, as well as Canadian Forces Base Shilo, also helped in the fight.

Scott McDonald, Brandon’s deputy fire chief, said crews that arrived at the scene of the Christie’s fire immediately realized Massey Manor across the street needed to be evacuated. Police then went door−to−door to get the residents out.

The building was renovated in the last 10 years and had sprinklers on every floor, but McDonald said the roof was badly damaged by flames and some of the upper floors also sustained fire damage. Two other buildings in the vicinity also burned.

"When you’ve got that many structures involved, your concern is getting control ... so that you don’t have more structures that become involved," McDonald said.

Parham, who has been a volunteer firefighter for 36 years, said his crew, which included his 27−year−old son as well as another father−and−son team, were placed on the corner of a building that housed a beer store and a vacant bar.

It was already a "huge fireball," he said, and most of what they were doing was knocking down the flames and keeping them from spreading to neighbouring buildings, including the Greyhound bus terminal.

"For a volunteer rural department, to be involved in something like yesterday is probably an experience of a lifetime," Parham said.

McDonald said firefighters were still at the scene dousing hot spots on Sunday.

The city said that as of Sunday morning, 93 adults and 57 children had registered at an evacuation centre, and residents have been placed by the Red Cross at a local hotel.

The Bear Clan Patrol, a volunteer group that patrols inner−city streets, has collected clothing and personal necessities for the displaced residents, but posted on social media that it now has enough.

—By Rob Drinkwater in Edmonton