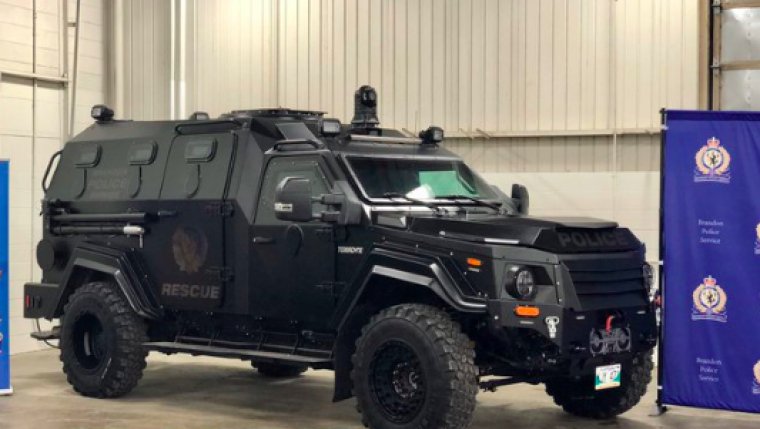 MANITOBA - Province of Manitoba announced that a new tactical vehicle has been delivered to the Brandon Police Service.

The new tactical vehicle will help ensure high-risk incidents in southwest Manitoba can be resolved quickly and safely, Justice Minister Cliff Cullen said in a release.

“Having the proper tools can help police officers respond quickly and safely, protecting themselves and the public,” said Cullen. “Brandon police have recognized this vehicle will be an incredible asset in dangerous situations, and our government is pleased to invest in an initiative that will bolster officer and public safety throughout southwest Manitoba.”

Earlier this year, the Manitoba government announced its plans to invest approximately $400,000 with Brandon Police to purchase an armoured rescue vehicle (ARV). The vehicle has been delivered and is now available to respond to high-risk incidents involving firearms or other significant dangers to officer and public safety.

“The addition of the armoured rescue vehicle to our fleet will allow for increased safety for both the citizens we serve and the police officers that are tasked with bringing these high-risk situations to a safe conclusion,” said Chief Wayne Balcaen, Brandon Police Service. “If deployed during a live event, citizens and police are provided an incredibly safe option. Having the ARV available for all of Westman is essential as we continue to work collaboratively with our justice partners.”

Officers have been trained on special procedures related to the ARV and are ready to respond as needed. BPS will also make the vehicle available to other police agencies in the region to support their responses to high-risk incidents.

This provincial investment is provided through the federal Proceeds of Crime Fund, which made up of forfeited funds provided to Manitoba from federally prosecuted Criminal Code offences. The province has also distributed approximately $1.6 million to law enforcement agencies across Manitoba from its Criminal Property Forfeiture Fund this year.